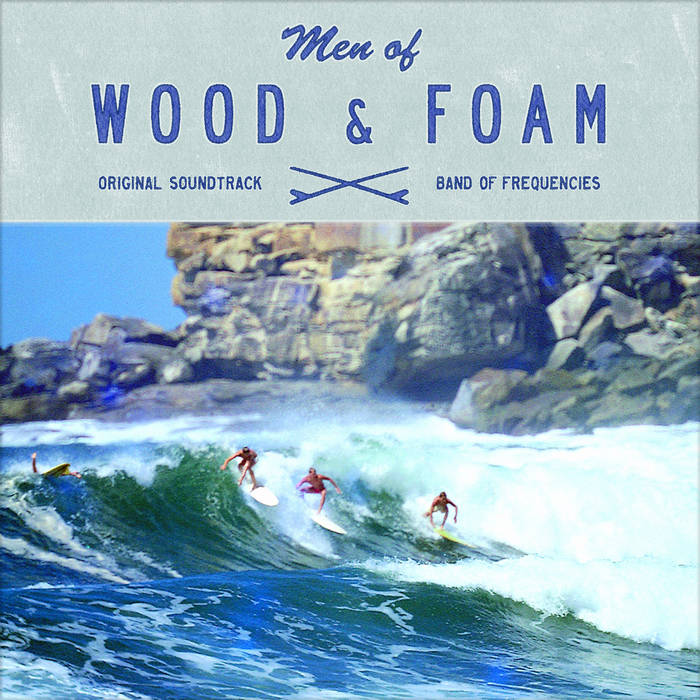 When I first considered using an original soundtrack for Men of Wood and Foam, rather than trying to buy rights to obscure old tunes from different eras, Band of Frequencies was really the only way to go.

I’d watched and listened to their increasingly diverse and interesting sounds over many years of directing the Noosa Festival of Surfing – where the Freqs are always a standout act – and I instinctively felt that they would be able to mesh musical styles from the Brubeck and Shank cool jazz of the late 1950s through the guitar-driven surf instrumentals of the 1960s to the Hendrix-inspired acid rock of the early ‘70s.

I had so many ideas, I wanted to see plans, how the hell was this going to work! But, of course, this is not how the Freq’s operate. It’s all in the feel. Director Shaun Cairns and I went into the second night of the Tanuki Lounge sessions not knowing what to expect. We came out spinning with excitement.

To be honest, Shannon and OJ had no idea who Bud Shank was when I first suggested they listen to him. They didn’t know too much about Dick Dale either, but Hendrix they had covered. Not that it mattered. These guys are consummate musicians with salt in their veins, and the music they have created evokes the period of our film so brilliantly it brings tears to my eyes.

And, on a personal note, the Freq’s were very kind when I gave them some lyrics I’d written to help them on the way to a title track. Having never written a song in my life, I was probably a little out of line. But there you go – it works! Shannon’s vocal turns my trite lines into poetry, the band soars, and Wood and Foam becomes a song that defines a golden era in surfing.

The original soundtrack to Men of Wood and Foam was written and recorded in three days and reflects three decades of surf inspired sounds. With the story of the Australian surfboard pioneers known as ‘The Brookvale Six’ being the focus of the documentary, we were given a framework to lay down our interpretations of surf music from the 50s, 60s and 70s. Music has always been an intrinsic element within the surfing subculture, so it was fun to explore some of the sounds associated with those eras.

The theme song for Men of Wood and Foam is a collaboration, with Band of Frequencies providing the music and writer/producer Phil Jarratt contributing the lyrics. When Phil approached us he already had a tune in mind and suggested we listen to some of Neil Young’s anthems for inspiration. With that as a guide, OJ and I threw some ideas around beforehand and then hammered them into shape in the very little downtime we had in the studio. Once everyone chimed in and contributed ideas to the tune and arrangement, it came together quickly.

The rest of the soundtrack is instrumental and mostly improvised with only a select few tunes being deliberated over for longer than a few minutes. We used a method we called ‘Powerball’, which is akin to a game for generating ideas and moving through concepts quickly. We basically counted in tempos and feels and then gave ourselves three minutes to find something we liked. If it didn’t gel then we’d move on. If it had potential then we’d talk it over briefly and have another crack at it. Sometimes we’d just count in a groove and lay it down, having never spoken a word and ended up keeping the first and only take. The surf guitars tunes were recorded originally as ‘Powerball’ jam ideas and then we (mostly OJ) wrote the melodies for them that we overdubbed later.

Sound engineer and co-producer Paulie B at Tanuki Lounge studio was instrumental in pulling the sounds indicative of the times. Using old ribbon microphones and keeping the setup minimal helped maintain the authentic feel of the recordings. Paulie’s contributions to the recording session flow and his second guitar also greatly assisted the creative process.

Band of Frequencies’ line-up on this album features the return of Terepai Richmond to the drum set. We have collaborated previously with the ‘Pai-man’ on two film soundtrack albums, Life Like Liquid, by Dave Rastovich (Low Pressure Productions) and Under the Sun by Californian filmmaker Cyrus Sutton (Ubiquity Records). In all of these recordings Terepai’s playing and musicality brings out the best in everyone, and he is incredibly adept at casually weaving all the elements together. On organ and keys Andrew ‘Mouse’ Szumowski blew our minds with the classic 60s lines and growling tones he threw into the mix. Brother OJ ‘The Juice’ Newcomb is on bass frequencies, laying down the foundations. He also returns to playing upright bass on this record, and that’s always a pleasure to hear.

I cannot express how grateful I am to make music with these legends. We hope you enjoy listening to these tunes as much as we enjoyed making them.